A Growth Unlike Any Other

Posted by: Interview with Audrey Hood by MC Wall on August 20, 2019 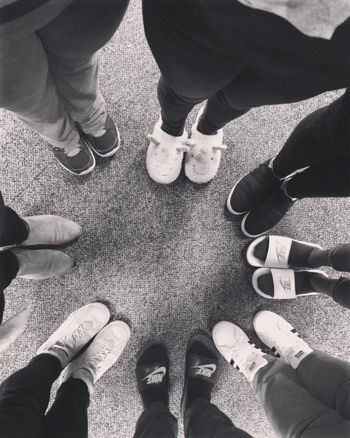 A growth unlike any other: becoming a My Life, My Choice facilitator

She started as a woman searching for a mission.  Audrey Hood was praying for a cause to be

passionate about. She wanted to find something in which to pour her time and talent. The anti-

human trafficking cause was placed in Audreyâs path, and she found that the urge to help fell

heavy on her heart. On a mission trip she learned that the industry was prevalent on the East

Coast, in discovering that she knew that it must also be prevalent in Indianapolis. Armed with the

strength of a new calling, she searched for a way to get involved at home. Like so many stories

of people who have helped here at Purchased, Audrey did everything she possibly could to make

herself known at our organization. She walked into our world at a time that My Life, My Choice

facilitators were being sent for training. Our founder Jessica reached out to ask Audrey if she

was interested, and Audrey said yes. She was trained right away, but she knew that she had

found the right place for her passion when she met her co-facilitator, Schawayna. The two were

opposites in almost every way, but they knew together they had something special. They had a

way to bridge gaps and form relationships. In places that needed healing in the lives of the girls

they serve, Audrey and Schawayna showed a healthy relationship between women with different

backgrounds. They had a stark difference in image and were a model for racial reconciliation. To

many girls, trauma experience lends itself to uneasiness and racial distrust. Their friendship

spoke louder than their words in the beginning, modeling a healthy relationship while walking

alongside girls searching for that very thing.

The facilitator training was held in Boston over a weekend in October. In one word, Audrey

called the training a whirlwind. She, like many of us, was unfamiliar with the issue. In a short

time, she learned the basics of the trafficking world as well as the critical knowledge of how to

interact with the survivors. She returned home to keep learning though, seeking increasing

knowledge, wanting to know as much as possible. In this vein, a word of advice to future

facilitators is to seek knowledge and information beforehand. Equipping yourself with

requirements to become a facilitator include either being a survivor, having five years of trauma-related experience , or

having a masterâs in social work. Audrey was grandfathered into the program, but

impact of the program as a whole. Having worked with many girls over the years since her

training, she has learned alongside the experiences of survivors. Audrey sees the impact that her

own experiences have provided to enhance her time as a facilitator, but she knows that the

trauma the girls have experienced is often greater than she can even imagine.

Watching girls open up, seeing the lightbulb click on, is what Audrey considers the most

impactful part of being a facilitator. One of the value parts of this program, among many, is that the

curriculum gives definitions to the life experiences of survivors. My Life, My Choice is often the

first time any of these girls have heard the message that what happened to them was wrong.

Having the words to describe the pain endured is empowering. Language, claiming truth in the

right words, gives each girl the power to own their story. Knowing the truth around their

experiences shows girls that they deserve a life outside the world theyâve always known. The

Life, My Choice curriculum. Journals are private between the girls and the facilitators, and

reading those journals is a window into the lives of the girls served. The facilitators write back

each week, and in each group, Audrey sees growth. The girls grow in their journals, evidenced

on paper that they want control of their lives. They grow in person, sharing and claiming their

stories. They grow, too, alongside the facilitators. Audrey feels she has grown the most in human

understanding: sheâs grown to be perceptive and more empathetic, and she has found that she

became more intentional in her everyday life: seeing each person as affected by their experience,

sensitive in their own ways.

To anyone considering becoming a facilitator, Audrey shares that in this position one must be in

a very healthy place, and ready for growth. âDo it if you can. Youâll hear stories, you will learn.

Be prepared to be surprised, itâs never going to be what you think it will be. Have a good support

system, an open mind, and a willing heart.â These girls need the chance for a better life, and the

person to open up their future could be you.

Purchased invests in youth through educational opportunities, empowering them rise to the challenge to be allies against sexual exploitation and collaborates with organizations to provide survivor support. Purchased also facilitates events to raise awareness and educate people about modern day slavery, and inspire them to join in the abolition movement.